Our DM’s DM will be in town next week so he’s hosting a one-off game of Blades in the Dark for us. Today, I created my character for this new game.

BitD is a tabletop role-playing game about a crew of daring scoundrels seeking their fortunes on the haunted streets of an industrial-fantasy city. There are heists, chases, occult mysteries, dangerous bargains, bloody skirmishes, and, above all, riches to be had — if you’re bold enough to seize them.

I am Gwack Zextra (our DM taught me a ridiculous naming formula and I made it ridiculouser. Gwack is a 38-year-old male Leech, which is basically a technician, tinkerer and saboteur adept at forging criminal tools- forgery kits, lock-picking equipment, bombs, etc. Oh, I can also distill drugs.

I like to design my characters as much as I can to help me get into their heads and understand them. Hero Forge is great for quick character design. For Gwack, our new GM sent me a shadowy reference image of a vampiric man holding a skull and it felt a bit trite, especially in Victorian times. It didn’t feel right. My inspiration for Gwack Zextra was more of a “what if Boris Karloff was cast in Twilight” vibe. 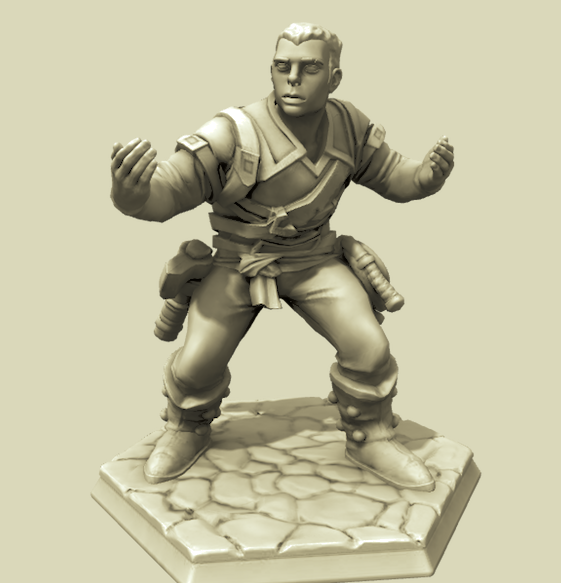 The training required to become a Leech is rare and strange – As a sickly orphan in the city of Akoros, Gwack had to be resourceful to survive. His quest for medicine led him to a curious medical “doctor” who cured the boy with elaborate machinery and foul-smelling tinctures. Once healed, Gwack stayed on as a sort of apprentice. He learned how to build weapons, torture devices, and explosives. In his spare time, he worked out in the streets to regain his physical strength, growing in strength and formidability.

Now that he’s a double threat with strength and strategy, he prefers to use his skills for mayhem and destruction. Though he can be known to heal a lucky companion from time to time, the side effects often create their own malady.

Have you played Blades in the Dark?