*Since my family first got an NES, I’ve had a controller in my hands. Exploring new worlds, meeting new characters and experiencing stories… in some ways, I’ve just connected better with the world through games. However, it’s also very important to me to be present in my life, to improve myself, to go out and MEET the people I’ve connected with online and to expand my knowledge. I spend hours in games; how do I level myself up?

In this weekly series, I’ll chronicle how I’ve improved my “stats” with completely arbitrary scoring.*

+1 Intelligence – How did I make myself a little smarter? What did I learn?
I learned a new city! I don’t know if there’s a city in the country more sprawling and intimidating than LA. Thanks to Glux, we figured our way around and learned A LOT about where to stay and what to do if we ever come back.

-3 Charisma – How was I less awkward or more beautiful?
Fail. I got major sunburn on my face and arms just from walking around LA. I picked up some SPF 100 on Day 3, but it was too late. 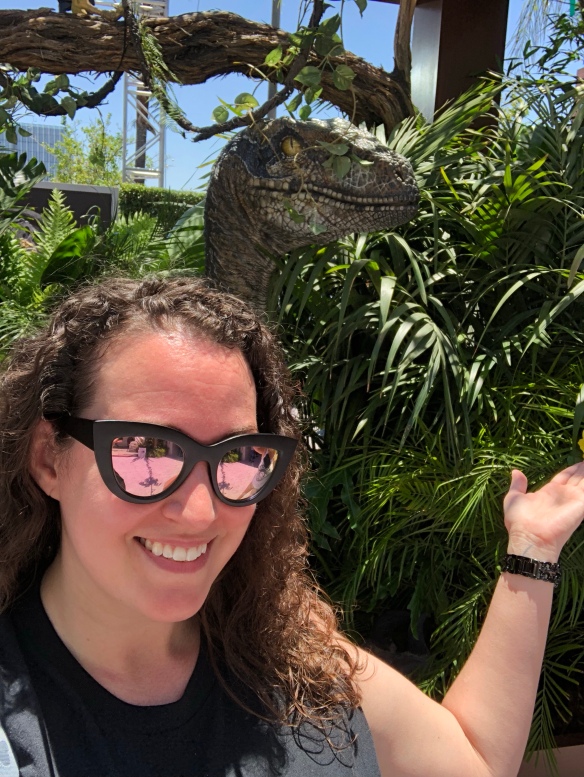 -2 Strength – New workouts, breakthroughs, challenges.
I never work out on vacation. Packing extra shoes and a couple sets of workout clothes just seems ridiculous. I should really change this mentality though and keep up my momentum when I’m away.

+1 Defense – Where did I consciously avoid or deflect negative energy?
E3 was a major test of patience. Lines everywhere. Smelly gamer boys pushing and shoving through the crowds. Long days on my feet. But I rolled with it, stayed calm and had a great time.

Maybe this Deathclaw would have more luck with lines

+3 Luck – Something good that happened this week.
SO many good things happened! I got to play the new Smash Bros. Ultimate at E3. Dinosaur encounters peppered my week. My carney connections got me access to Universal Studios Hollywood with Express Pass so I could skip the 2 hour lines! We went early on Friday before the park got crowded and I finally got my Ravenclaw robes and a wand of Ivy, perfect for my magical outings! 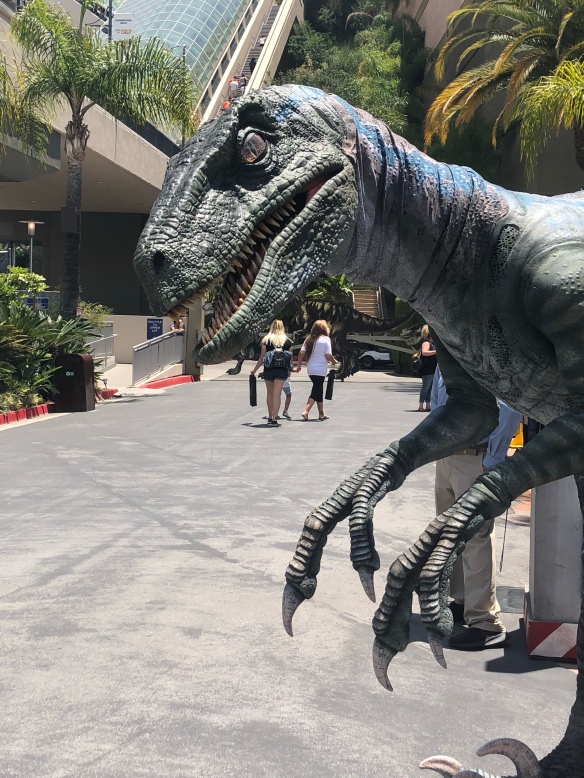 -1 Wealth – How did I save towards my goals?
I spent about what I thought I would on this trip. I’m not worried about money right now, but focus needs to shift back toward paying off my debts. This trip allowed me to hit the spend threshold on my Chase Sapphire Reserve card so I get 50k bonus points. That will pay for my next trip!

How did YOU level up this week?

Thanks to Universal, I was invited to an advanced screening of Jurassic World: Fallen Kingdom yesterday. I’ve been excited about this release since the last movie rolled credits. At that time, I left the theater pumped up, riding high on thrills and nostalgia. After Fallen Kingdom, however, I left disappointed and confused.

Overall, it seemed like a bunch of recycled scenes taped together with disconnected stories and new characters too far down the timeline to care about. And the characters I know and love, fell flat. Ian Malcolm’s scenes seemed to be added as an afterthought just to include him in the film. Benjamin Lockwood is introduced as having an equal hand in the original park since day one as John Hammond’s partner. I racked my brain going over the last 4 movies for any mention of a Lockwood. There was none. So the plotline this movie hinges on feels forced and confusing.

As for the horror element, there were a couple of cool stylized shots. The dinosaurs are much more aggressive and threatening. Even some of the herbivores remind us they can be just as deadly. But the big, creepy mansion where most of the action takes place is a done to death horror staple that makes the trailers super misleading and the story further weird-feeling. I’d love to do a film over film comparison of deaths by dino. I’d bet that Fallen Kingdom was on the lower end of the carnage scale, but there were a lot more scenes full of suspenseful near-death moments that I really enjoyed.

The dinosaurs really lead this one. Owen’s backstory with Blue is really sweet and emotional. It was refreshing to see so many humanizing and relatable moments between them, a reminder that both of them are deeper than their appearances. One of the best scenes, which is somehow both funny and brutal, stars a new dinosaur to the series who will become an instant fan favorite – Stygimoloch. 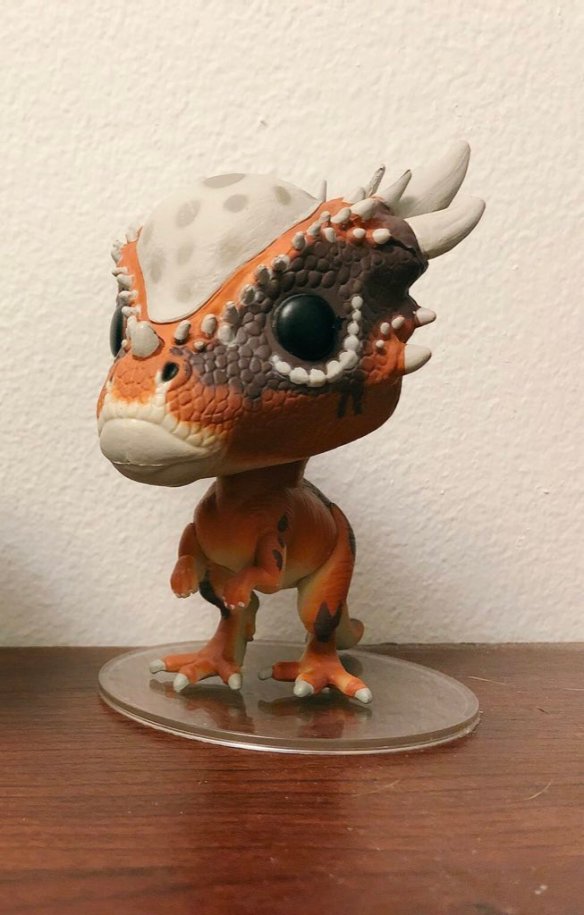 Dr. Wu’s new prototype is the most horrifying creature yet. Made by combining velociraptor genes with DNA from the previous film’s main attraction – Indominus Rex – the Indoraptor was expertly crafted for killing. 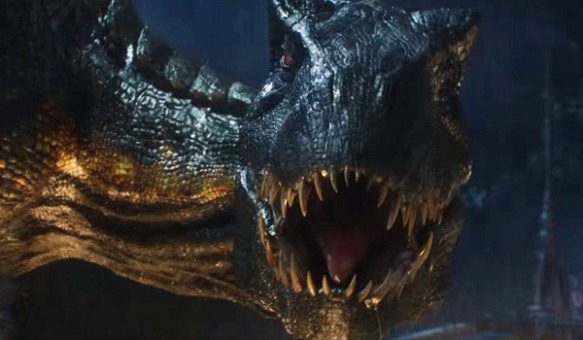 She gets a good amount of screen time to show off her speed, ferocity and terrifying intelligence. Her black and gold snake-like skin differentiate her from the classic predators as well as the new creations, making her stand out as nothing we’ve ever seen before. Fierce, beyond dangerous and utterly unstoppable.

I think we could have gotten a stronger story with existing characters instead of introducing so many new ones though. Dr. Henry Wu’s story for example – a genius geneticist who brought back an extinct ecosystem, exploited by various employers for their profit, caught in murky moral and ethical dilemmas. Is he a redeemable character? Could he be the ultimate villain?

Of course, I plan to see it several more times so we’ll see how my thoughts evolve after a couple screenings.

Do you plan to see the new Jurassic World?

Did you guys know about my borderline unhealthy obsession with Jurassic Park and dinosaurs? I just realized JW releases the same weekend I was supposed to visit home and guess which thing I’m choosing?

On Wednesday, I finally got a release notification for Jurassic World: Alive! and I’m just now coming up for air.

Basically, JWA takes what made Pokemon Go great and makes it so much better. You wander around the real world and encounter dinosaurs along the way. When you see one you want, tap it to initiate a mini game where you shoot DNA collecting darts from a drone. The range options are pretty great. The dino doesn’t have to be within your circle, but the battery life on your drone lasts longer the closer you are. On my way to work, I changed my route to catch a velociraptor on 9th Street. You can see how much battery you’ll have before you launch the drone. Once the drone is up, aim the crosshairs at the moving dot on the creature to collect DNA samples, which allow you to create and evolve your dinosaurs. So unlike pokemon, I don’t have a bunch of the same creatures junking up my inventory.

Collect enough DNA samples from a species, you head into the lab to create your dinosaur. Some are rarer than others and require more DNA to create. Level up enough and you can create HYBRID DINOSAURS.

You’ll want to keep an adequate dart supply for drone hunting, you spin supply drops. Sometimes you get cash or coins as well that you can use to evolve your dinos or speed up incubators earned from battle.

Yep. When you’re not hunting for DNA, you can pit your flock against randomly matched players. Obviously every creature has it’s own attack and defense style – smaller ones like dilophosaurus and velociraptor are super fast with high attack strikes, but low HP and defense. Some of the big carnivores will counterattack. Herbivores have higher defense and some have stunning attacks. You can have a mix of 8 dinosaurs in your lineup, but once in battle they’re randomized to a set of 4 you can use. I think this randomization goes a long way for keeping matches as balanced as possible

The battle objective is to defeat three of the opponents dinosaurs. When you do, a JP medallion at the top keeps score. The first to three wins! Toppling your opponents earns you coins and incubators that take from 15 mins to 8 hours (the highest one I’ve seen so far) to mature. Opening incubators nets you cash, darts, and rare dino DNA to help strengthen your line up. You can use cash to speed up the time.

The AR feature is one of the best I’ve experienced. I find it endlessly amusing to bring my brood to life in MY world. Here’s a dilophosaurus and a nundasuchus in my office, a majungasaurus asking some folks for money in Tompkins Square Park, and an allosarus picking up my MealPal at 5 Napkin Burger. The graphics and details are pretty insane.

It’s a hell of a battery drainer, but I’m enjoying it so far. Now I have an excuse to get outside and wander new neighborhoods with Muldoon. Because I can’t go hunting dinosaurs without Muldoon to protect me!

There were two big thrills for me during the Super Bowl:
1) Seeing my boyfriend cry when his Eagles won the Lombardi for the first time in their history.
2) The latest trailer for Jurassic World: Fallen Kingdom.

I can really see the horror influence here. Director J.A. Bayona is bringing a much darker feel to the films. And. I. Love. It. As a kid, seeing the first movie in the theater about 15 times, I got scared at the dilophosaurus/Jeep scene every time. I used to sleep on the top bunk and my headboard was against the wall, so there was this deep dark space behind my bed. It freaked me out so much, I had to fill it with stuffed animals because I was pretty sure a dilophosaurus was going to pop out of that space and rip me apart. While the other films certainly had moments of incredible tension, I’m hoping to find that fear again in Fallen Kingdom.

Look at that indoraptor arm curling through the window! Straight horror move right there. But I have so many questions now:
How does the indoraptor get into the girl’s bedroom?
Why is the rescue team moving the dinosaurs into a civilized area?
Why are they saving the most savage ones?
Why are they saving ANY other than Blue??
In the tunnel scene, that’s a baryonyx – are there going to be TWO major new dino villains? 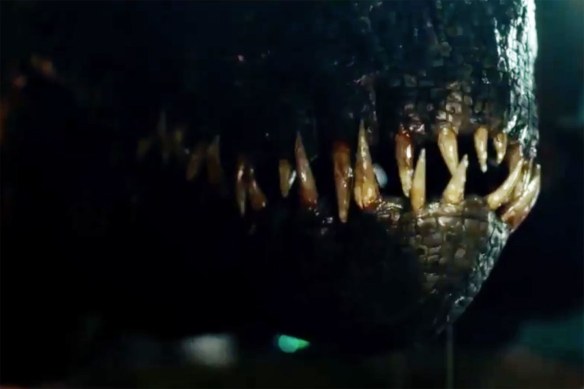 Speaking of, I’m stoked for new dinosaurs. That carnotaurus (RIP) is my soul dino and I’m hoping she survives that Rex attack. Baryonyx, Styrosaur maybe?? From the context of the plot, I think we’ll see more dino on dino fighting in the fray.

And old friends appear too. Can we talk about that T-Rex in the trailer scene! I already can’t breathe. In the new footage, Owen rolls out of a trailer holding a no-longer-sedated Rex, narrowly escaping the jaws of death. Look at the detail in the Rex’s face. There’s EMOTION in that (not even real) eye! In one still, you can see this momentary connection between human and dinosaur, you can practically hear the chain links of the food chain clink here as the Rex registers his nourishing surroundings.  I can’t wait to see this full scene in context.