After a very intense Splatfest that resulted in a heartbreaking loss for Team Money💸👼🏻, I was ready to dive into something new. On Friday, Nintendo released Bayonetta 2 for Switch. The physical copy comes with a code for the first Bayonetta game so I figured this was a good time to give the series a go. Ryan sweetly picked me up a copy and my long weekend disappeared into Vigrid.

First of all, this is not the kind of game I’m used to seeing on a Nintendo console. I wrote emails to Nintendo for MONTHS begging them to bring The Binding of Issac to 3DS. I always got the response that due to the religious themes and overtones of the game, they weren’t allowing it. That game is now out on both 3DS and Switch. In Bayonetta, you are literally a bad-as-fuck dark witch whose main goal is essentially to destroy God as well as all the angels and beings of light that may stand in your way. It’s brutal. It’s incredible!

I’m a big fan of the noir style of the game. Many cut scenes employ still frames of film scrolling by to help tell the story. There are a lot of sepia-toned flashbacks, black and white and red lipstick, and of course, gangsters and shady bartenders who might be devils. Rodin might be my favorite NPC.

Bayonetta is on a mission to uncover her past as well a mysterious jewel called the Right Eye. On her journey, she fights all manner of cherubim and demi-dieties who hint at her impending role in the resurrection of Jubileus, The Creator. I did not immediately notice that her outfit is composed of her own hair, which she can also wield as a conduit to summon demons!. The hair dragon and hair raven were two of my favorite manifestations. 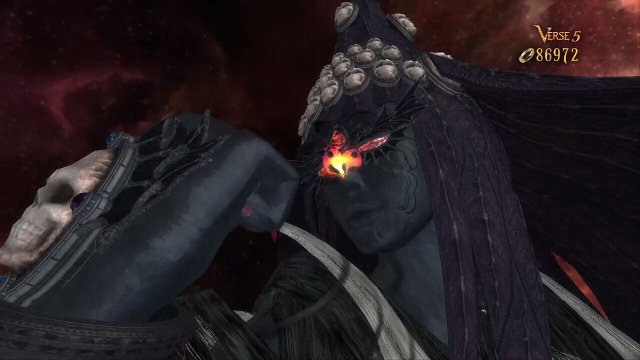 Of course, the game is deeply sexy, but Bayonetta is always in full control of her sexual agency, which I really appreciate. She’s not there to be sexy for the male characters; she’s there being sexy for herself and kicking angel ass. It’s so refreshing to play a female protagonist who is so unapologetically feminine and fearless. Aside from her gun-heeled stilettos, she keeps her outfit changes in a compact and fires her lipstick like a bullet to finish a critical battle near the end of the game. So empowering.

I played through this game with my jaw on the floor mostly. The innuendo. The violent and graphic destruction of angelic beings. Bayonetta’s nudity every time she summons another hair demon. This has to be my favorite scene of all time.

This is the most goddamn brutal beautiful scene in the history of video games… #Bayonetta #NintendoSwitch pic.twitter.com/ziISqmsGWp

It never gets old and I cannot stop watching it! Bayonetta is the witch I’ve always wanted to be. How did I not play this game sooner? I’m looking forward to playing Bayonetta 2 this week. Until Then, don’t ever forget these immortal words of wisdom:

One thought on “Thoughts on Bayonetta”