Since 2009, I’ve been working with a deliciously dark, Tim Burton-esque tarot deck known as the Deviant Moon Tarot. I don’t remember how I discovered it or where I got it, but it was the beginning of my tarot practice and study for a series of poems I’m eternally writing. This deck has always connected with me. It’s become an extension of myself to the point that cards will literally leap out of the deck to give me messages. I trust it and I’ve bonded with it, but I wanted more options. [Deviant Moon Tarot Interview] 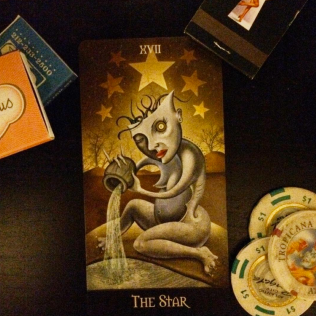 Some years later, the Tarot of the Silicon Dawn found me. This deck bills itself as a challenge with extra cards (Void cards and 99 cards for each suit, four Fools, etc…) and also presented stunning, colorful, comic book style imagery. I fall in love with it every time I open the box. It’s been the toughest to connect with, but I keep crawling back to it begging for love. [Tarot of the Silicon Dawn Interview] 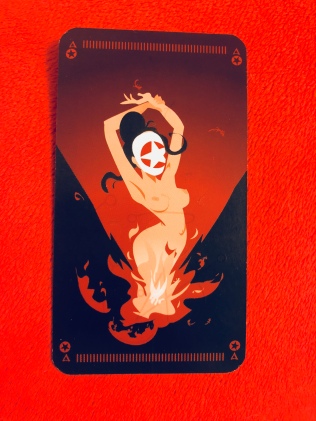 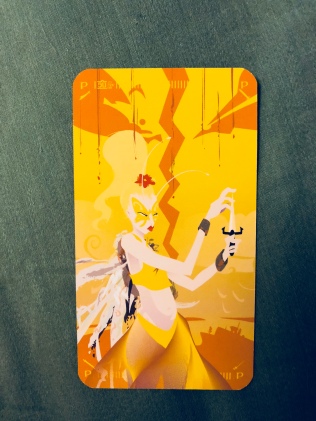 Back in January I was casually feeling up books at The Strand, as I’m prone to do any time I’m in the vicinity. I was poring over Frank O’Hara’s Lunch Poems when I felt a sort of warm tugging. I looked up and locked eyes with The Wild Unknown sitting randomly atop some stationery. That’s never happened before. I picked it up on the spot. [The Wild Unknown Tarot Interview] 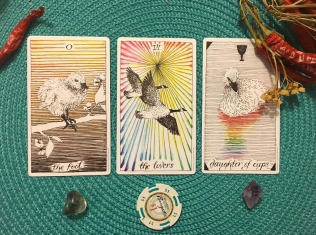 For Galentine’s Day, I treated myself to a tarot deck based on one of my favorite games- The Binding of Isaac Tarot. It’s not the most functional deck. The suits are non-traditional and it doesn’t come with a booklet to ascribe meaning to the suit of hearts (cups?), keys (wands?), bombs (swords?) and coins (pentacles?) but the art is fantastic and it crosses my love of magic with my video game vice. [Binding of Isaac Tarot Interview] 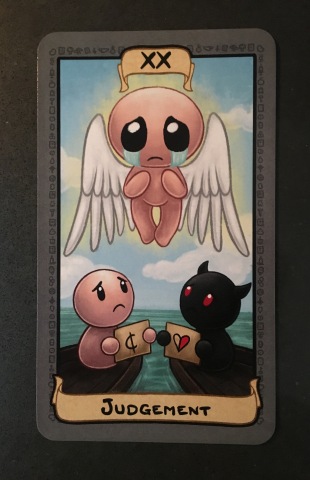 I gifted myself the decadent Lioness Oracle Tarot for my birthday in April. Drawn in by the beautiful and surreal collages- particularly Nosferatu on the Nine of Swords and David Bowie on The Star- this has become my regular deck recently. It traveled the country with me last year. [Lioness Oracle Tarot Interview]

As a bit of retail therapy, after a summer of working nights and weekends non-stop, I splurged on a deck I’ve been pining for on Instagram for a while- the psychedelically divine Tarot and Secret Arcana by Oliver Hibert. With roots and imagery deeply based in the traditional Rider-Waite tarot, this deck is easy to read and learn through. The saturated colors truly make this deck a favorite. [Oliver Hibert Tarot and Secret Arcana Interview]

Finally, for Christmas Ryan got me the ornately minimalistic Golden Thread Tarot. These cards are made of a thin plastic with golden overlays so they feel completely different from any other deck I’ve owned. [Golden Thread Tarot Interview]

So now I have seven decks. Seven personalities. Seven moody mistresses who fall in and out of my favor. If I ask the same questions or if my decks have a message for me outside of what I think I want to understand, they’ll get frustrated and serve up the same card until I’m finally enlightened. But when it comes to sharing a shelf, I like to think they all conspire together for my greater good. With all those personalities in a room, they must have some otherworldly debates and discussions. If cards are jumping out of decks at me or I’m getting the same card, unrelated to my questions, over and over, I believe it’s because they’ve all pooled their energy to give me a cosmic kick in the ass.

UPDATE: See all the tarot deck interviews, including a NEW deck, below!

9 thoughts on “Do Tarot Cards Get Jealous?”